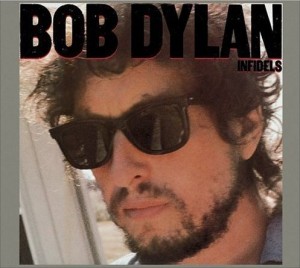 One of my favorite Bob Dylan songs is “Sweetheart Like You” from his Infidels album. When I first heard it I was taken aback by the words, how Dylan was able to weave such a poignant story with cinematic qualities. That’s why there will be no songwriter in our time quite as good as Bob Dylan.

When I listen to this song I picture a seedy bar, almost empty and a sweet little old lady who cleans up after the drunks.  I couldn’t have imagined these scenes in my mind without Dylan’s words. Dylan creates these visions for us lyrically.

It was Bob Dylan who wrote “Make You Feel My Love“,  not Adele.  Adele is a great singer and songwriter in her own right, but you have to hand it to her for admiring greatness like that.

Here are a few lines from “Sweetheart Like You” by Bob Dylan.

We’ll the pressure’s down, the boss ain’t here, he gone north for a while.
They say that vanity got the best of him, but he sure left here in style.

By the way that’s a cute hat, and that smile’s so hard to resist. What’s a sweetheart like you doing in a dump like this?

You know I once knew a woman who looked like you, she wanted a whole man, not just a half. She used to call me sweet daddy when I was only a child, you kind of remind me of her when you laugh.

In order to deal in this game, gotta make a queen disappear, it’s done with the flick of a wrist. What’s a sweetheart like you doing in a dump like this?”

Take a listen and tell me what you think, does this song move you in the same way?