Anyone who knows me personally will soon learn how much I love The Who. It’s almost like I look for an opening to mention a great Who song or one of their great rock operas, TOMMY or Quadrophenia. My love for The Who started early when I was about 8 years old, having heard the acoustic guitar introduction to “Pinball Wizard” and thinking, “I have to learn how to make that exact sound”. I was too young of course to understand many of the dark themes in the lyrics to TOMMY, was even turned away from a cinema in Camberley one Saturday when my Mum took me to see the movie. My Mum loved The Who, though her favorite has always been Roger Daltrey.   I wanted to know who did that with the guitar and that person was Peter Dennis Blandford Townshend.  I picked up a guitar and the inspiration was born.

I followed The Who and the solo career of Pete through good times and the bad. He was not only The Who’s primary songwriter, but arguably the most entertaining guitarist to watch on stage.  I  found his music both inspiring and a constant source of comfort to me over the years. It’s in the words of songs like “Behind Blue Eyes” for when I am feeling misunderstood, it’s the fading end to “Bargain” when I I yearn to be taken away by the majestic groove, it’s my teenage years walking around hopeless Aldershot, England in “Rough Boys.” It’s in “Exquisitely Bored in California” shortly after emigrating to America as a teen.

So you can imagine my delight in late 2005 early 2006 when Pete decided to open an account on Blogger and start releasing chapters of his novella “The Boy Who Heard Music” each Saturday, interacting with fans about the story, offering insights on the writing, and holding our attention for about three precious months.  Over the course of the project a core group of around 100 bloggers became friends and started to connect with each other. We would start to read each others blogs, learn about each other’s lives. There was Maria in Finland who would soon graduate with a PHD, there was Gina B and her dog Beatrice or “Bea Bea”, the two were never photographed separately. There was a mysterious character named Tommy D who would post incredibly long verbose diatribes which would sometimes get a rise out of Pete, and finally there was a fellow named Neil Emery who went on to become one of the greatest friends of my life who I never met in person. Neil was a wonderful funny guy who would post the most hilarious blogs about meeting Pete, or other famous musicians. He would mock up photos in Photoshop of himself standing next to Pete and put “I love this guy” with an arrow pointing to himself on Pete’s tee shirt.  Sadly, Neil passed away a few years ago at a very young age. I grieve his loss to this day, he was a comedic genius.

I remember almost falling out of my chair when Pete sent me a note one day thanking me for my comment on his blog and offered an opinion about what I said. It was a remarkable time.  But when the project concluded and the Epilogue was published, Pete announced the blog would stop accepting comments and soon close. The core group of bloggers were very sad about this and started rapidly exchanging email addresses and blog URLs vowing to stay in touch. Blogger had served its purpose. Pete had published the work online for free, and interacted with a large audience on the material    The last line of the last post read   “…now the art is finished.”

Feeling sad and inspired and wanting to say more, I picked up my guitar and started writing a song that would capture my feelings about what we had just been through. I wrote and recorded “Walking On The Grid” in my little home studio.  In “The Boy Who Heard Music”, the Internet was referred to often as “The Grid”, and meeting people from all around the world felt very much like walking on a simple grid to friends in close proximity.  These were now people with whom I interacted with on a regular basis, they were people I considered friends.  After I recorded the demo of the song, friend and blogger Paul Biscardi contacted me asking permission to use the song in a video tribute he was working on for Pete. Paul created a wonderful montage video with clips of Pete in his studio and pictures of the bloggers who I mention in the song.

Around this time, Pete’s partner Rachel Fuller had started an Internet chat show called “In The Attic” with her childhood friend Michael Cuthbert. Pete would regularly guest on the show with his younger brother Simon Townshend.  The show was cutting edge. Several notable artists of today appeared on the show.  Adele sang two songs in one episode and sat chatting with Pete and Rachel while smoking cigarettes. It was a wonderful follow-on to the now defunct “Boy Who Heard Music” project.

In April of 2006 Pete and Rachel premiered Paul Biscardi’s video. It was one of the most amazing birthday presents I have ever received, having my idol sit there talking about a song I had written. It felt so wonderful hearing him interact with us on that level.   In 2007 Pete, Rachel and Mikey took “In The Attic” on the road with The Who.  Rachel had just released a new solo EP and was promoting it across the country in appearances in Barnes & Noble, so we went up to The Grove in Los Angeles to one of the events and met Rachel and Pete, who was there to support her.  He was so very kind, and signed a copy of “The Boy Who Heard Music” which I had specially bound for the occasion. I gave Pete a copy too.  We had a wonderful conversation about an unpublished Who song called “Uncertain Girl”, and Pete gave me the back story on the song, knowing I knew all of the words, he disclosed the song was about Sinead O’Connor, who had invited him to give her away at her wedding. 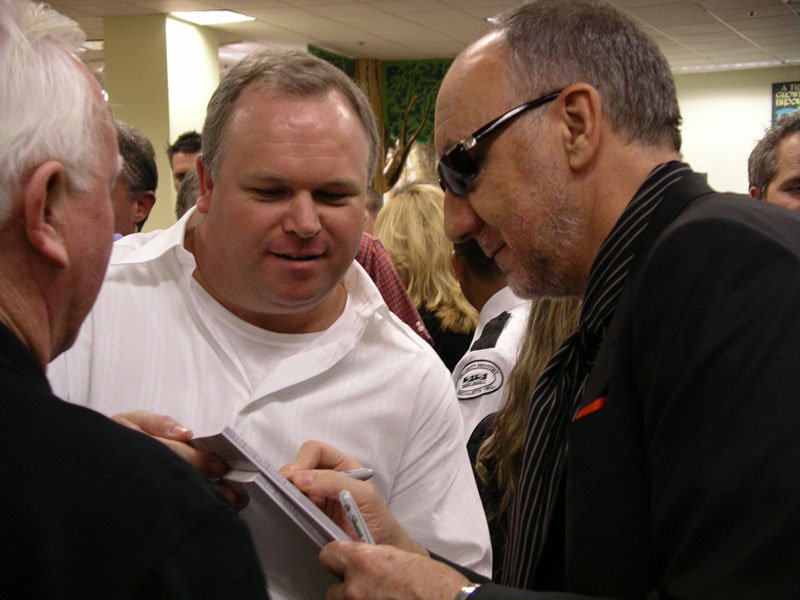 I think back on this period between 2005 and 2007 with such fond memories. I got to meet my idol. I got to write a song. I got to make new friends. I grieve the loss of a friend I never met.  What a wonderful journey that was.