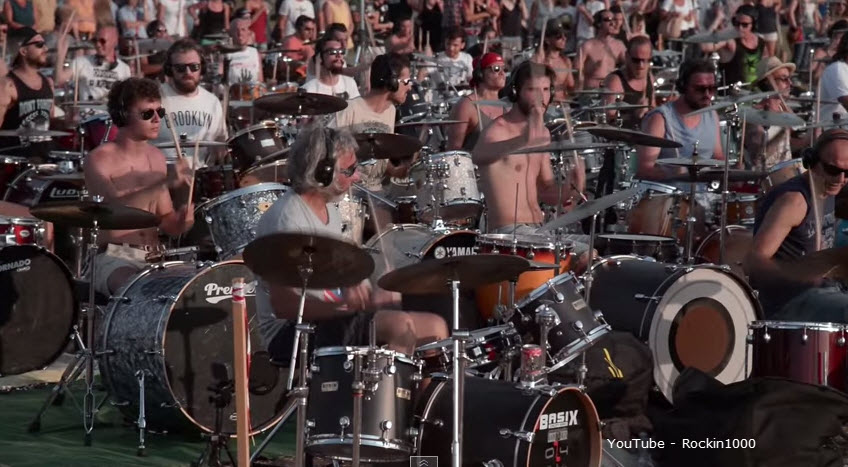 To call Fabio Zaffagnini a fan of the Foo Fighters would be a huge understatement. I would say he’s their biggest fan because this week social media blew up over a video he created powered by a movement of Italian rockers and a crowdfunding campaign –Rockin 1000 with a goal of assembling 1000 musicians to play “Learn To Fly” and personally invite Dave Grohl and the Foo Fighters to play a concert in Cesena, Italy.

In the video we can see a massive band consisting of drummers’ bass players’ guitarists’ and singers,  1000 in all who convened on an Italian field in May of 2014 with two goals, 1) break the Guinness World Record for the number of people on a single stage, and 2) make a personal plea to the Foo Fighters.

When I watched the video this morning I found it strangely moving. Being a musician myself and also a fan of the Foo Fighters I found myself becoming moved to tears by the conviction and passion displayed by the Italians. I can only imagine what Dave Grohl and the rest of his band thought of this creative achievement.

Let’s talk about Dave Grohl’s work ethic for a second. A few months ago he fell off stage in Gothenburg, Sweden and broke his leg. He was temporarily hospitalized while the audience in the stadium waited for word on his condition. Rather than taking a powder, Grohl asked his roadies to set up a chair and support his leg which was by then in a cast so he could continue the show and finish the performance for the fans. What does that tell you about work ethic? It not only speaks volumes for his love of rock ‘n roll, but also his dedication to Foo Fighters fans, it also says a lot about his professionalism in finishing what he started. I’ve long admired Dave Grohl for his work ethic, he really does work hard at his craft, and he truly lives the dream.

But while we are talking about Dave Grohl’s work ethic we can’t ignore the tremendous commitment and organization it took to pull off this social media spectacle. The crowdfunding campaign raised over €44,000. It was filmed professionally and edited for maximum impact, every detail including crowd volume control was planned out, you’ll notice in the video at the end how Fabio Zaffagnini can speak while the crowd listens in perfect silence while he makes his appeal directly to the band. Try doing that with thousands of people in an open field. Not easy.

The logistics for this video were amazing. For one, how do 1000 musicians keep perfect time? In the video you can see the conductor but immediately below him on the riser you can see lights pulsing to the beat of the song so all could play in perfect time. Most of the musicians have microphones and real instruments plugged in, it must’ve sounded awesome. A drone took spectacular aerial footage, GoPro cameras were mounted in front of the conductor and in several vantage points. And the close-ups of the crowd having the time of their lives brought the whole thing to life. It was authentic and real, and it was AWESOME.

The Response and Pay Off

Word of the video spread fast. It was published two days ago on July 30th and has already received over 12 million views on YouTube alone. It wasn’t long before Dave Grohl himself sat down with his phone to record a short statement for Rockin 1000 and the people of Cesena, Italy.

I am sorry I don’t speak Italian, just a bit, a bit.

This video, was good! Super nice. Thank you so much.

We’re coming, I swear. We’ll see each other soon.

Thank you so much. I love you.

The world of crowdfunding is making amazing things happen around the world. New products are being developed, breakthroughs in science are happening, creative endeavors like this one are becoming a reality, dreams are coming true. Fabio Zaffagnini made his dream come true through crowdfunding and the Internet. These are amazing times my friends.