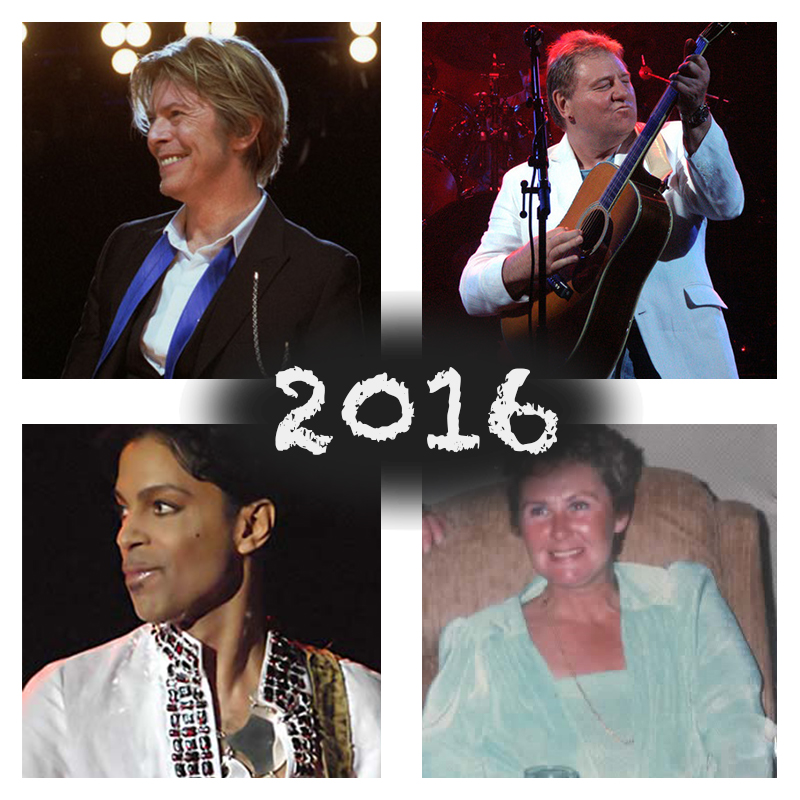 It’s been quite a terrible year. I’m sitting reflecting on the year that just passed drinking coffee, having a think about what 2016 dealt and what 2017 might hold.

A body in decline

Things had not been going well for my Mum these past few years. At the start of the year I noticed that the words in her vocabulary had started to become limited and our interactions by Skype phone had become weekly check-in’s to make sure she was keeping warm, that the care givers were visiting her, and that she was using the electric fire in her bedroom, the appliance we had installed, but that she felt was too costly to run. She had recovered from a nasty chest infection a few years prior that landed her in the emergency room and in recovery for close to a month.  But now her memory was failing her as she tried to remember Stephani’s name and sometimes even mine.  Her greatest challenge in the end was her fight against Cancer and COPD, which would again land her in the hospital, this time from a broken hip. She was trying to switch off or turn on electricity to a power strip next to her television, and toppled over, breaking her hip.

This month I have been remembering what it was like for Mum near the end of her life. Gasping for every breath. Shouting at the nurses. Being sedated. Staring off into space for hours at a time as I sat at her bedside making small talk, repeating questions I knew she had answered an hour or so before. My job was to keep her in good spirits by bringing up the good times. I’d say my Mum had a relatively happy life once she met my Father, but the marriage was not easy. We moved around quite a bit as Dad made the leap from lorry driver to antique dealer to U.S. immigrant, taking us along for the ride of our lives. She developed a dependency on alcohol during my teen years, and this only seemed to amplify her inner sadness and feelings of low self esteem. I remember coming home finding her drunk and crying often.  She had a very sad streak in her personality. But the sad streak was a gift too because she wrote some lovely poetry. I know I inherited this from her.

This year I have spent a lot of time self analyzing my own traits and trying to develop more self awareness. I know that I have the sad streak. I know where it came from, the challenge is managing it and living with it. This month I have been sad a lot.  Some days it has been hard to get out of bed.  Some days it has been hard to smile because it will be the first Christmas I will not be able to Skype Mum and talk about the good old days. I think what’s different compared to three or four years ago, is that I am able to recognize when I am sad and I know that the feeling will pass in time, so I get on with my work and move forward.

This year we lost so many great and talented artists.  David Bowie, Prince, Greg Lake to name a few. David Bowie knew he was dying and decided to look death in the face and laugh, leaving us a beautiful thank you card in his “Blackstar” album.  Prince passed away from complications related to a dependency on opiates, something thousands of fans found hard to accept, and Greg Lake, from Emerson, Lake and Palmer passed way at 69 after a long battle with Cancer. Only recently have I started to appreciate Greg’s music, even wonderful 80’s rock anthems like “Heat of the Moment” which he sang with his band, ASIA, and ELP’s “From the beginning”, which I love to play on the guitar occasionally.   Greg wrote a beautiful Christmas song called “I believe in Father Christmas” and I think this one song will be his swan song, remembered and sung for years to come.

I hope Joe Biden continues to work on President Obama’s Cancer Moon Shot project to cure cancer. It is taking so many victims. But after the election, and seeing the kind of administration we will have near term, my hope for lofty, aspirational ideas like curing cancer are slowly fading with each cabinet appointment.

I hope 2017 is a much better year than this one.  I can’t wait till 2016 is over, so we can move forward as a country, and as individuals in whatever battle we are waging personally.

Good health and happiness to all of my friends in 2017.  Your friendship means more than any of you know.